This part comprises our annual report on the operation of the Public Interest Disclosure Act 2013 (PID Act) as required by s 76 of the PID Act.

The Office oversees the operation of the Public Interest Disclosure (PID) Scheme (the scheme), established under the PID Act. The scheme promotes the integrity of the Commonwealth public sector by providing for the reporting and investigation of wrongdoing and the protection of whistleblowers.

The Office has three primary functions under the scheme:

The Inspector-General of Intelligence and Security (IGIS) has oversight of the six intelligence agencies subject to the scheme1 and has the same allocation, investigative and educational functions.

This report has been prepared with the assistance of 172 agencies covered by the PID Act. We would like to acknowledge their efforts in collecting the data required for this report.

Elements of the scheme

The scheme is designed to be accessible. The low threshold for making a disclosure is intended to encourage public officials to come forward and report wrongdoing. The protections under the PID Act apply to disclosures that:

‘Public official’ is broadly defined and includes contracted service providers and subcontractors. Similarly, ‘disclosable conduct’ captures a broad range of conduct, such as the breach of a law or of the Australian Public Service (APS) Code of Conduct. These broad definitions mean the scheme attracts reports of wrongdoing across a wide cross section of agencies and activities. Agencies must investigate a PID unless certain circumstances apply, such as the matter having previously been dealt with through another process. At the conclusion of an investigation, agencies must provide disclosers with an investigation report that explains the findings of the investigation, and any actions taken or recommendations made. Disclosers can make a complaint to the Office or IGIS if they are dissatisfied with an agency’s handling of their PID.

PIDs at a glance

disclosable conduct were ‘conduct that may result in disciplinary action’, 'maladministration' and ‘contravention of a law’. *Conduct in a foreign country that contravenes a law; fabrication, falsification, plagiarism or deception in relation to scientific research; and conduct that endangers, or risks endangering the environment.

Agencies may decline to investigate a PID, or decline to further investigate, for a range of reasons. This year agencies declined to investigate (in full or part) 117 PIDs. The most common reason was because the PID did not concern serious disclosable conduct.

We remind agencies at our regular PID forums that a PID investigation that does not result in a finding of disclosable conduct, may nonetheless identify an opportunity to mitigate potential risks of wrongdoing or improve agency practice and procedure.

*Conduct engaged in for the purpose of corruption; fabrication, falsification, plagiarism or deception in relation to scientific research; perversion of the course of justice; abuse of public trust and conduct that endangers, or risks endangering the environment

Agencies reported a range of outcomes and actions following investigation, including:

On two occasions agencies contacted the police because there were reasonable grounds to suspect that a disclosure included evidence of an offence.

The PID Act also enables agencies to recommend investigation of a PID under another law. Common areas for referral include the Public Service Act 1999 (for investigation of Code of Conduct matters), Defence Force legislation, Public Governance Performance and Accountability Act 2013 (for fraud matters) and Workplace Health and Safety legislation. This year, 75 recommendations for referral were made. Consistent with last year’s results, the majority involved a referral for investigation under the Public Service Act. 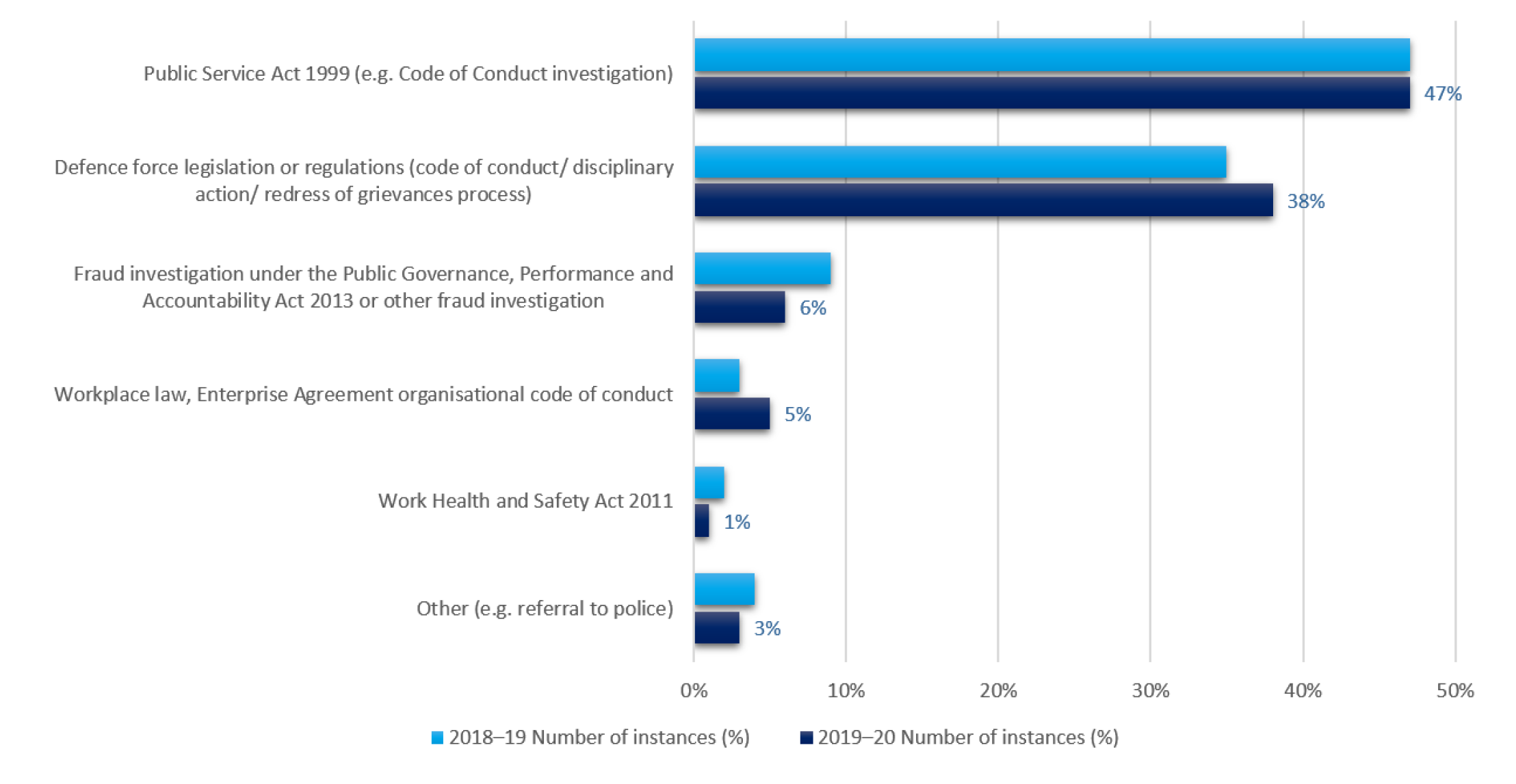 For full details of the number of PIDs received, the kinds of disclosable conduct alleged, the number of disclosure investigations and the actions taken in response to recommendations, see Appendix 8.

Who is using the scheme?

Given the broad use of contracted service providers across the Commonwealth it is possible that they remain under-represented in the overall numbers of disclosures.

Many agencies however report providing PID information to contracted service providers via other means, such as during the procurement and contracting process, via access to the agency’s intranet, or through informal distribution of information. Since the number of disclosures from this cohort was again relatively low at just four per cent, lack of awareness may be a barrier to reporting. We will continue to remind agencies of the need to ensure awareness of the PID scheme among this group.

3Agencies may deem a person to be a public official in certain circumstances. Agencies generally use this approach to investigate PIDs from non-public officials who may have special or inside information about wrongdoing in an agency.

A public official may only make a disclosure to an authorised officer4, to their supervisor or to the agency’s principal officer. As with last year, most disclosures were made to authorised officers, however the proportion decreased slightly (76 per cent, compared with 80 per cent in the previous year). The proportion of disclosures made to either supervisors (11 per cent) or directly to principal officers (13 per cent) remained comparable to last year.

4A person appointed by an agency's principal officer to receive disclosures. Principal Officers are required to ensure there are sufficient numbers of authorised officers to ensure they are readily accessible to public officials in their agency.

Table 2—Average number of authorised officers in an agency, by agency staff size

The PID Act imposes a 90 day timeframe on investigations, subject to possible extension from the Office or IGIS where there are reasonable grounds. If an investigation is not completed in time and an extension is not granted, the discloser may in certain circumstances seek redress by disclosing the information externally. Most investigations were completed within 90 days (61 per cent) with 25 per cent taking between 90-180 days and 14 per cent taking more than 180 days.

The Office received 171 requests for extension of time, of which 164 were granted. Disruptions attributed to COVID-19 were mentioned as at least one of the reasons for an agency needing additional time in 15 extension requests.

Disclosers who believe they have been subject to reprisal are encouraged to raise the issue with their agency. Agencies are expected to investigate claims of reprisal and, if appropriate, refer the matter to the police or other oversight agency. Disclosers may also contact the Office if they are dissatisfied with the agency’s handling of their reprisal claim.

In 2019–20, Commonwealth agencies reported a total of 36 claims of reprisal, more than double the number reported in 2018–19 (17 claims). The types of conduct alleged included bullying and harassment and unreasonable management or performance management action. Agencies reported that, following investigation, one reprisal claim was substantiated. The Office also received 14 enquiries or complaints directly from disclosers raising concerns about reprisal. Disclosers variously elected to make a PID regarding the reprisal action, make a complaint to our Office or await the outcome of the agency’s investigation report. The Office is continuing to consider available guidance to agencies about managing the risk of and investigating concerns about reprisal.

The Ombudsman and IGIS can review agencies’ handling of PIDs to assess whether their actions are reasonable and whether agencies are complying with the PID Act and their own PID procedures.

In 2019–20 the Ombudsman received 51 complaints about agencies’ handling of PIDs, which was comparable to the 52 complaints received in the previous year. Common complaint themes were:

We decided to investigate 23 of the 51 complaints we received this year. We finalised 30 complaint investigations and made formal comments or suggestions about improving agency processes in 15 matters.

A discloser complained that an agency had not assessed their disclosure in accordance with the PID Act. During our investigation of the complaint, the agency advised us that an authorised officer had decided not to allocate the disclosure because the requirements in s 26 of the PID Act had not been met.

In our comments to the agency, we noted that this approach was inconsistent with the PID Act. We observed that the threshold for allocation of a disclosure is intentionally low, and that it is not an authorised officer’s role to gather evidence or to reach a conclusion about whether the alleged conduct occurred when determining whether to allocate the disclosure to an agency for investigation.

Concerns about agencies’ communication with disclosers arose in a number of the complaints we finalised this year.

In one case, a discloser complained to us that they had made a number of attempts to contact an agency about their disclosure, but had not received a response. One of the discloser’s concerns was that the agency had not adequately explained how it had assessed the allegations in the disclosure.

As a result of our investigation, we reiterated our expectation that agencies keep disclosers reasonably informed of the progress of their PID, and acknowledge and respond to correspondence from disclosers within a reasonable timeframe.

We completed two disclosure investigations this year, both of which commenced in the previous reporting period. Of the investigations completed, one resulted in two findings of disclosable conduct. The Office's recommendations focused on governance and oversight, the agency's monitoring of the ongoing risk of reprisal, PID training and a review of the agency's policy documentation.

Throughout the year the IGIS provided assistance and advice to officials within the intelligence agencies. Our Office assisted the IGIS where needed on the performance of its functions under s 63 of the Act.

The IGIS received two direct disclosures, both of which related to Australian intelligence agencies. One was investigated by the IGIS under the Inspector General of Intelligence and Security Act 1986 (IGIS Act) and no evidence was found to substantiate the claims. In the second case, the IGIS exercised discretion not to investigate, or investigate further, under s 48(1)(h) of the PID Act.

The IGIS did not receive any complaints about the handling of PIDs this financial year.

In the first half of this year we ran two PID forums. One was specifically for Investigation Officers and the second brought together the diverse range of agency personnel who may be involved in handling PIDs from receipt through to finalisation. While in previous years our events have been largely role-specific, strong attendance at the second forum indicated the value of the new initiative as an ongoing component of our engagement strategy. Cumulatively, a total of 121 representatives from a large cross-section of agencies attended the two forums and provided positive feedback.

Trust, communication and action continued to be the central themes we promoted as pivotal to the successful operation of the scheme. Drawing on insights obtained through our complaint investigation function, we have encouraged agencies to be more attuned to the need for disclosers to be regularly updated about the progress of an investigation and provided with clear explanations of the PID process and possible outcomes.

With the onset of the COVID-19 pandemic in 2020, the Office made early contact with agencies to remind them of their ongoing statutory obligations under the PID Act and to seek information as to how agencies’ PID operations may be impacted by changed working arrangements. We advised on the continued importance of maintaining adequate resources in this area, as the scheme provides a vital mechanism for public officials to raise concerns about integrity and accountability within the public service, particularly during times of rapid and unprecedented government action.

Given COVID-19 restrictions and our resultant inability to convene further ‘in person’ forums in 2020, we offered our first PID webinar to agencies with a specific focus on their annual reporting requirements. This session was attended by 29 representatives. Until such time as large gatherings are feasible again, we will continue to explore the use of online platforms to meet agencies’ continued education and awareness needs in 2020–21.

In 2019–20 the Office responded to 374 enquiries from agencies and disclosers, a 58 per cent increase from last year, and we received 13,365 visits to the PID section on our website.

The Office made a submission on the operation of the PID Act to the Senate Economics Legislation Committee in relation to its inquiry into the performance of the Inspector-General of Taxation.